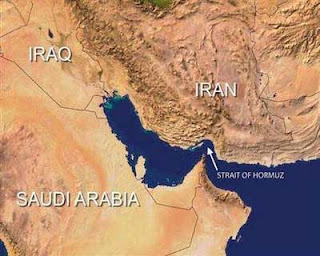 Military experts are seldom asking anymore if Israel will pre-empt a strategic strike upon Iran’s nuclear site(s). Mostly, they now ponder the possibility that a strike is imminent and potentially disastrous for world economies still struggling from the global financial crisis. Such a strike runs the real risk of opening a Pandora’s Box in the Middle East and one of the casualties could be the flow of oil presently coursing steadily through the Strait of Hormuz. (See Also - Iran Says West Military Action Will Cut Gulf Oil Trade,)

Iran’s apocalyptic minded president, Mahmoud Ahmadinejad, has publicly threatened the closing of Hormuz in retaliation for an Israeli or American strike upon his country. Additionally, two significant correlating events made the news in May, 2010. First, the Islamic Republic of Iran warned that it would launch terrorist attacks and suicide strikes inside of America in the event of a strike upon Iranian soil. Second, the Iranian Navy conducted a massive war exercise in the Strait of Hormuz, and Persian Gulf called “Judgment Day.” This drill reportedly demonstrated Iran’s sole and sovereign ability to control those strategic bodies of water.

Regarding the possibility of Iran playing the “OIL CARD” against America, on September 15, 2009 The Wall Street Journal published a Bret Stephens article entitled “Obama is pushing Israel toward war.” In the article Stephens suggested that a Middle East War could push the price of oil up to $300 per barrel. Lately, on average that precious black gold has been closing between $70 to $80 per barrel. Stephen’s estimate suggests an oil dependent world could be about to experience a spike at the pump of about four times the present amount. Iran still ranks number two behind Saudi Arabia in the OPEC oil cartel, which is responsible for two-thirds of the world's oil supply.

Are Americans, Chinese, and Europeans ready for such a steep increase? Such a dramatic and possibly overnight rise in the price of oil would certainly spill over into the economic essentials of their respective societies. Presently, America is the number one consumer of Oil and China (read more on China/Iran) ranks number two. Americans could expect to feel pain in the waiting lines at the pump and in their pocket books, as increased transportation costs would certainly be reflected in the price of goods sold over the retail counters across the country.

Is America about to have two major sources of oil capped off, BP in the Gulf and the Strait of Hormuz in the Middle East? I’ve asked an expert on the subject to abbreviate an article he recently wrote called “Peril Awaits at the Strait of Hormuz” for a posting here at www. prophecydepot.com Click here now to read the article by Dr. Lawrence Prabhakar.

On April 19, 2010 Israel celebrated 62 years of independence. On that same day American president Barrack Obama announced the United States may leverage its veto power in the United Nations against Israel in the future. His threatening statement, which represents a major departure from previous U.S. foreign policy, was designed to coerce Israel into Obama’s vision for Middle East peace. (read entire article now)

GENESIS 12:3 IS EFFECTUALLY IN TACT. (Video provided by Bob Mitchell / Revelation TV in the U.K.)