In light of the rumors of war between Israel and Iran these days there is a military intelligence report circulating that is commanding an enormous amount of Christian attention. The contents of this document are contained in Ezekiel chapters 38 and 39. These ancient biblical writings forewarn the world that Russia will form a nine-member coalition and invade modern-day Israel. Coincidentally, Iran, formerly known as Persia, is listed within this Russian consortium.

Many eschatologists are suggesting that the fulfillment of this Bible prophecy could occur soon because Russian and Iranian national relations are at an all-time high and Russia is proactively assisting Iran's bid for nuclear weapons.

Adding fuel to the fire, Iran's recently re-elected president, Mahmoud Ahmadinejad, has previously declared Israel should be wiped off of the map, and Israel's present leadership believes that Iran will soon have the nuclear wherewithal to accomplish his Jewish genocidal goal.

Without extending into a detailed Bible study nor an active litany of current Israel and Iran centered military events, the prophetic point of interest is that Russia's confederacy will be divinely defeated, and the Israeli Defense Forces (IDF) will confiscate a massive amount of its state of the art weaponry. This conclusion can be drawn from the events described in Ezekiel 38:18-39:9.

This suggests that at some point in the not so distant future, Israel will potentially become one of the most powerful military nations in the world.

Ezekiel 39:9 informs that us in the aftermath of Russia's invasion the Jews will possess much of, if not all of, Russia's, Iran's, Turkey's, Libya's and the other five confederate members' advanced arsenals. This intelligence information suggests that some of these weapons will potentially be nuclear in nature – we are informed that Israel will be converting these weapons into fuel for seven years.

In addition to this massive weapons cache, it is highly possible that Israel will already possess at the time large quantities of the current Syrian, Egyptian, Saudi, Jordanian, Lebanese, Hezbollah and Hamas Arab arsenals as well. As I detail in my book "Isralestine, The Ancient Blueprints of the Future Middle East," Israel will likely conquer these populations and confiscate their weapons prior to the events described in Ezekiel 38 and 39 in conjunction with the Bible prophecy of Psalm 83.

Presently, some Christian leaders are closely examining the staggering ramifications of a Greater Israel coming into existence in the aftermath of the prophetic events described above. For instance, for decades many Bible-based believers have been taught that the Antichrist will create a temporary end-times peace in the Middle East. The general understanding gathered from prophecies contained in Daniel 9:27, Isaiah 28:15,18 and elsewhere is that this charismatic last-days world leader will initiate a false seven year covenant that finally brings peace to the Middle East and protects the Jews from the Arabs and/or vice versa. 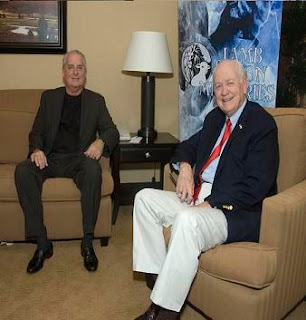 However, the new Psalm 83 insights, as Bible prophecy expert Dr. David Reagan (view Reagan / Salus TV interview) calls them, contained in "Isralestine" have many scholars re-thinking their end-times models. It is entirely possible that the powerful prophetic events blueprinted in Psalm 83 and Ezekiel 38 and 39 occur prior to the arrival of the Antichrist.

This possibility suggests that his false covenant with Israel is not an Arab-Israeli peace pact since Mideast peace would have already been achieved through the might of the IDF. This new presupposition has eschatologists pondering the possible content of the false covenant from a new Greater Israel prophetic perspective.

If, as Bible prophecy suggests, Israel soon becomes one of the world's mightiest military nations why will they concern themselves with a seven-year covenant, and what might this treaty purpose? To answer these questions one must advance the clock into the geo-political future and replace the struggling-to-survive lesser Israel of today with the mighty Greater Israel of tomorrow.

Please blog your comments below as to what you think the contents of the Antichrist's false Daniel 9:27 false covenant may be, or email them to info@isralestine.net


Article Postscript (Ps.) The comments below were not part of the original WND article, but were subsequently added to give the bloggers more to think and comment upon. I call it "Afterthoughts from Lawrence of India"
"Lawrence of India" W.Lawrence Prabhakar, Ph.D.,Strategic Affairs Analyst,
Associate Professor, Department of Political Science Madras Christian College
Chennai, India

a) What the IDF and the Israelis would likely be seizing the tactical nuclear weapons (TNW) that the Russian-Iranian nine-nation nuclear-missile coalition would be deploying in that massive invasion. It could include an "exotic" variety of nuclear weaponry complete with ERRB (Enhanced Radiation Reduced Blast)"neutron warheads", and Electromagnetic scalar "tesla howitzers". The Russians could also deploy scalar electro-magnetic weaponry, a technology Israel also possesses, in mobile formations. The IDF victory in the earlier war decimating the Psalms 83 ten-nation Arab-Palestinian coalition a.k.a. tents of Edom as an “exceeding great army” (Ezekiel 37:10) would be empowered by the Lord God of the Universe and the stunning display of Israeli weaponry including her ultra-secret "tesla howitzers" and scalar electromagnetic weaponry.

b) In the unprecedented Divine destruction of the Russian-Iranian nine-member nuclear coalition, vast stocks of fuel cells—the energy power-packs of the land warfare systems that would be left intact in the battlefield. These fuel cells as we know could be the future power-source of many of the land-warfare systems. It is these fuel cells that could be Israel's source of energy (Ezekiel 39:9,10) for the next seven years. The IDF appears to engage in a post-disaster clean-up that is going to be the most complex in all history of human warfare with the battlefield. This "special operations" of clean-up the post-Gog-Magog defeat inferno by the IDF would be in military terms a very "high-end constabulary and post-disaster mop-up operations" creating the atomic cemetery city called Hamon Gog (Ezekiel 39:11)

c) The dramatic and unprecedented scope of God's intervention (which would not even be the moving of His little finger a few micro-millimeters) would simply ravage the coastlands of Russia, Iran and the nine member nuclear coalition (Ezekiel 39:6).

The Gog-Magog coalition’s "joint operations" of an air and land assault against Israel coming from the North-east, North-west land route axis going through Lebanon and a coordinated naval amphibious assault from the Mediterranean from the Syrian ports of Latakia and Tartus which would be teaming with Russian submarines and naval craft-all in place for that one massive assault on Yisrael. The Russians aimed at such an assault in the sidelines of the 1967 War but had to abort it due to the lightening Israeli victory. (Isabella Ginor & Gideon Ramez (2007) "Foxbats Over Dimona: The Soviet Nuclear Gamble in the Six Day War, New Haven: Yale University Press")

With the enemy force concentration at its optimum, the IDF would be swamped on all sides as the Russian-Iranian joint land-naval-air forces and nuclear forces would move in unison at the "high end of military interoperability". (Ezekiel 38:16) That would be the very point of "jaws of defeat and obliteration for Israel”; yet in utter total surprise would be the massive unprecedented Divine celestial assault of extra-terrestrial cosmic hailstorms that would rip these forces into utter oblivion. This could cause massive Tsunami on the Syrian-Lebanese coast tossing the coalition's naval armada. What a grand finale of humiliating and grinding defeat for Russia, Iran and the nine member nuclear coalition being powdered to dust and ground to oblivion.

The Lord God sets one enemy against the other when He miraculously saves His Children of Israel. (Ezekiel 38: 21) "And I will call for a sword against him throughout all my mountains, saith the Lord GOD: every man's sword shall be against his brother."

I dont anticipate the Russian-Iranian coalition actually assaulting Israel. if it were to do so then Israel would not survive the scope of the joint operations. What is clearly evident in the Word of God is the "knocking out of the bow and arrows" Ezekiel 39:3 meaning the offensive systems are pre-emptively decapitated before their payloads could strike Israel--the implication of this verse is resoundingly clear in the manner in which the Russian-Iranian nine-member coalition land, naval, air and nuclear artillery forces are decimated by the "Divine celestial sledgehammering" combined with the massive explosions of their own ordinance on themselves.

Besides the devastation creates an atomic graveyard of molten human, metal mass that reads that Israel "shall go forth" Ezekiel 39:9 meaning that it would be in the outskirts of Israel and not in Israel. Therefore the physical security of Israel is clearly intact

Looking at this forthcoming scenario, it only makes me to ponder how much more would the Lord God do for us in the Rapture that would perhaps come in the close heels of either the Psalms 83 or the Ezekiel 38-39 prophetic fulfillments.

The Rapture by equivalent would be the expending of a million-on-million power of thermonuclear energy levitation of the saved souls in Christ from all over the world, from all ages, and from all forms of matter into the Most Glorious and awesome Presence of the Lord God of the Universe and His Son Our Lord and Saviour Jesus Christ 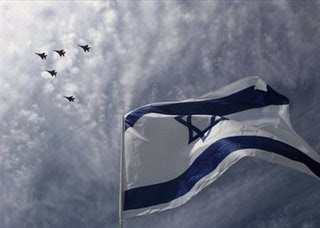 From shovels to Sherman Tanks, pitchforks to Patriot Missiles, and knifes to Nuclear Warheads, those resilient Israeli Defense Forces (I.D.F.) have managed to defend a nation that for all intents and purposes should have been wiped off the map a few decades ago. Coming out of 1,878 years of worldwide dispersion and the holocaust, the Jews have managed to muster up a mighty military machine that in just sixty-one years now threatens to send Iran’s nuclear program back to the “stone- age”.

Many experts, like eschatologist Hal Lindsey and former U.S. U.N. Ambassador John Bolton, are suggesting that may soon happen. Israel appears readied to knock the nuclear bow temporarily out of Iran’s hand and from my prophetic vantage point this could be a primary reason Iran, formerly Persia until 1935, isn’t listed in the upcoming Psalm 83 confederate invasion of Israel. Persia is omitted from the Psalm 83 bible prophecy but oddly they bare their banner in the Russian invasion of Israel described in Ezekiel 38 and 39, which is an event some scholars, myself included, sequence subsequent to Psalm 83.

It could be that a forthcoming strategic Israeli strike on Iran’s nuclear sites renders Iran of little utility to the Psalm 83 confederates destined to soon assemble and conspire to destroy Israel according to Bible Prophecy.
(view entire article now) 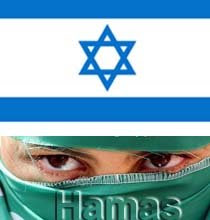 *Does Daniel Debunk the Assyrian Antichrist?

To have Bill Salus speak at your Church or prophecy conference contact info@isralesine.net or call 800-472-5335